Durban Poison – South Africa’s first cannabis beer. Many of the cannabis community may pick flower over drinks, but this crisp beer can be enjoyed by everyone.

Who is Poison City Brewing?

Poison City Brewing was created by a couple of Durban boys – Graeme and Andre. Two gents with a love for their city, a good beer and some top shelf cannabis. Their beer project is a toast to the soul of the city of Durban.

Their first lager came to fruition in 2014, with a basic brewing system at a mates house. This batch was loved by friends, leaving them begging for more. Graeme and Andre were happy to oblige – and so began their amazing journey.

Durban Poison is one of the world’s most popular cannabis strains. They saw this as a fitting name for their lager. Launching this brew shortly after cannabis decriminalisation, it immediately became a hit, as well as a fascination of many.

Poison City hit the nail on the head with the design for their cannabis beer. Sticking with a simple, dark green theme, they’ve put out a classy package that captures the essence of a cannabis flower. With a little bit of gold trim to spice things up, and a no-nonsense sticker – the beer is clearly labelled and appealing to the eye.

The beer itself is a clear golden colour. Similar to that of a Castle or Heineken, giving a deliciously refreshing appearance. The beer does have a decent head that lasts fairly long with a decent amount of bubbles.

It’s most definitely a great looking beer – but does it have the taste to match?

At first, Durban Poison has a taste similar to other lagers. However, as you take a second and third sip – the true flavour appears. It’s a light-tasting beer, with a smooth hops finish and not all that bitter. The beer does also have a lasting natural and earthy after taste – a reminder of the hemp within.

Poison City Brewing makes this beer by using cannabis as well as hops in their formula, which gives it its unique flavour profile and crisp mouthfeel. This beer is differentiated from the classics due to the natural hemp after taste and ever so slight sweetness.

Durban Poison has a 4% alcohol volume, making it a fairly light dop. This is on par with most other beers you can grab from your local bottle store.

As a beer, it is as effective as you would hope. Providing a nice light buzz, with minimal bloating. And for those who are turned away from beer because of your diet, this does have a calorie count that’s on the low side.

Although this is a cannabis lager, it doesn’t contain any THC. So this beer won’t actually get you high – which is a good thing. Mixing booze and marijuana doesn’t always end well! Poison City Brewing has simply replaced some of the hops with cannabis, which is straightforward enough seeing as the two plants are very closely related.

Even though this lager goes through a few extra steps to infuse the cannabis, it doesn’t break the bank. Retailing at R85 for a six-pack, it is level with the likes of Heineken. This makes it affordable and easily justifiable.

All-in-all, this cannabis beer is a unique, local brew with a great taste! It has a fantastic price point, especially if you want something a little different and enjoy a slightly more earthy but refreshingly crisp taste.

Written by a staff written for Cannabis News ZA 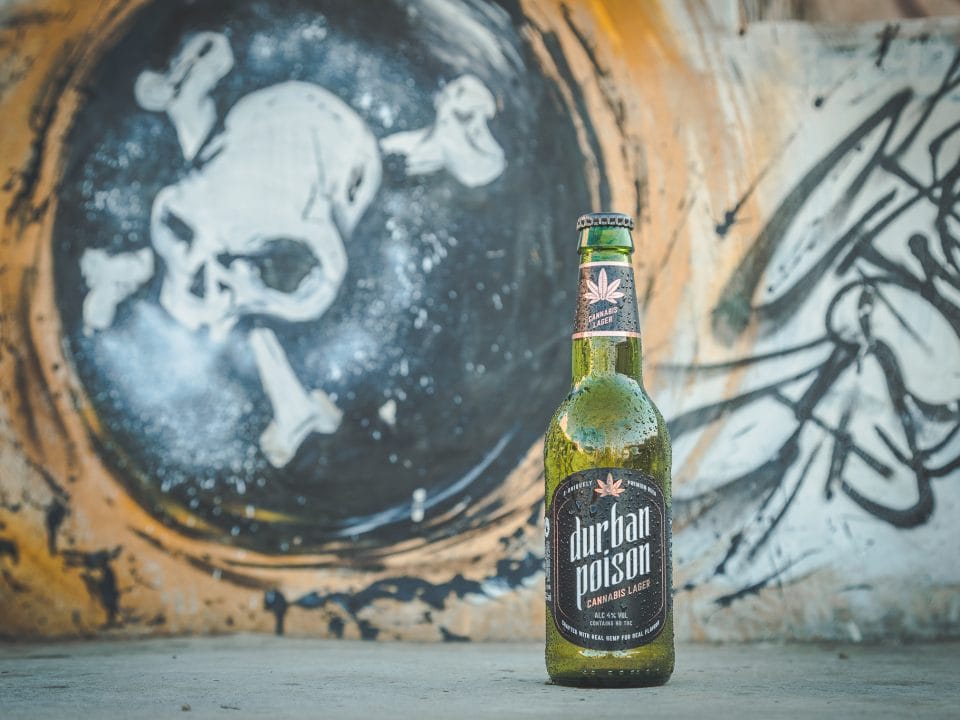