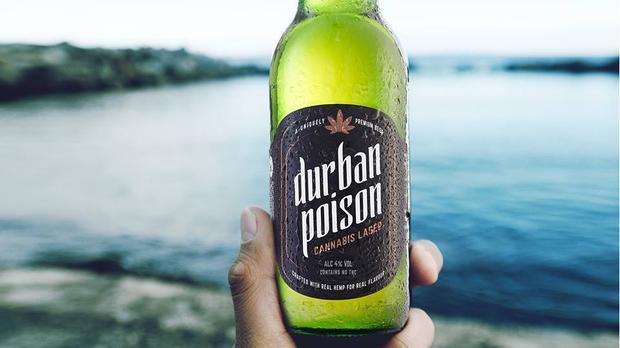 Cannabis-flavoured products have been soaring in popularity ever since the Constitutional Court ruled that dagga is now legal for private use in September last year. From cannabis beer to cannabis energy drinks, consumers can now buy weed-flavoured products off the shelf in retail outlets. South Africa’s home-brewed canna-beer, Durban Poison Cannabis Lager, launched just four months ago and has already sold nearly 1 million bottles. It’s available at liquor stores for just R18 a bottle.

Co-creator Graeme Bird said he has been blown away by the response from local consumers. “I knew there was an appetite,” he said. “It’s definitely breaking down barriers of perceptions about it.”

Internationally, brands such as Heineken and Corona have already announced they are developing dagga-infused products, with some on shelves already. The drinks may be branded as cannabis products, but don’t get too excited – they don’t contain any actual marijuana or tetrahydrocannabinol (THC), which is the main psychoactive chemical found in cannabis. It is still illegal for that to be sold or bought commercially.

The Durban Poison brew uses hemp seeds to add its unique flavour. Hemp and cannabis are the two main species within the cannabis family, but hemp is not highly psychoactive and is legal for commercial use in South Africa. Surprisingly, it is also closely related to hops, which are traditionally used to flavour beer. “Hops and cannabis are part of the same Cannabicea family. They actually have a whole bunch of similar flavour profiles,” Bird explained. “Hemp gives the beer a nuttiness and a smoothness that makes it go down really nicely.” The Durban Poison brew has been picked up by one of the country’s major alcohol distributors and is now available in liquor stores nationwide – which Bird takes as a sign that top-level alcohol companies see the commercial potential of canna-beverages. “There’s no doubt you’re going to see a bunch of cannabis products entering the market,” he said.

Marketing analyst Chris Moerdyk says it’s totally legal to use cannabis branding, even if there isn’t any THC in the product. “If anybody is claiming that there is real marijuana in a product, then that’s fraudulent,” he said. “If they’re just calling it cannabis, it’s perfectly legal – there are an enormous number of examples in the world of product names which don’t describe the product at all. Tomato chips don’t contain any tomato, and buffalo wings are chicken.” Moerdyk said these products are riding a wave of weed hype which has swept through the country – and also potentially setting up their brands for the future when it may become legal to include actual cannabis. “Cannabis has become the big thing in South Africa ever since the Constitutional Court decision,” he said. “What they’re doing is just taking advantage of the tremendous publicity that’s around cannabis at the moment.”

For Bird and Poison City beers, including actual THC in a refreshing, non-alcoholic drink is the ideal end game. “The modern consumer who is more health-aware is saying, if I can get a social high of cannabis rather than alcohol, that’s a much better option,” said Bird. Bird has trademarked the Durban Poison brand overseas.