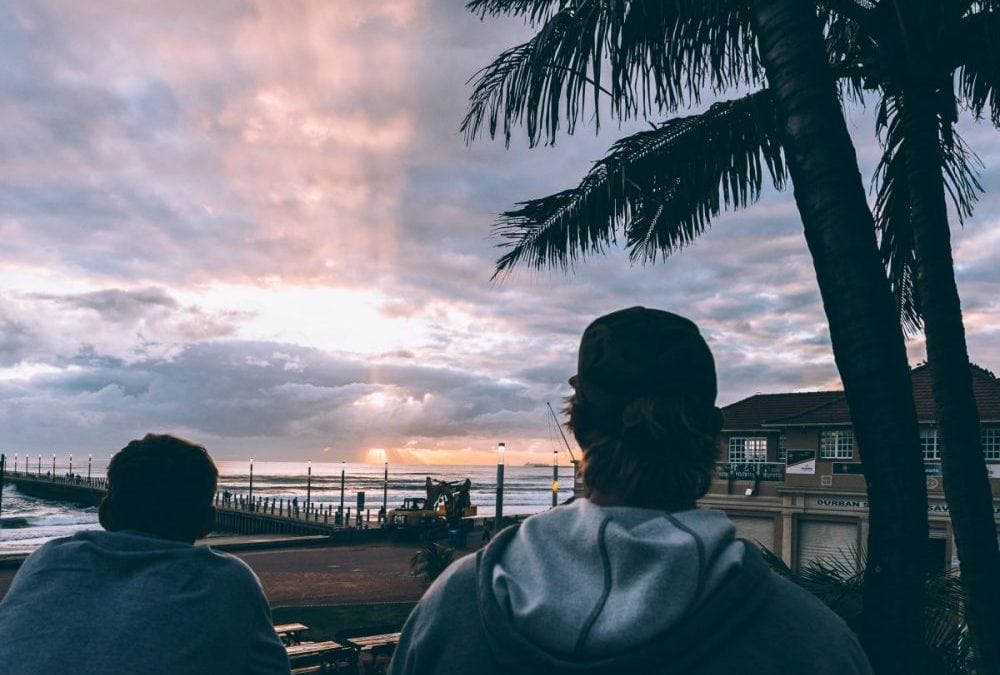 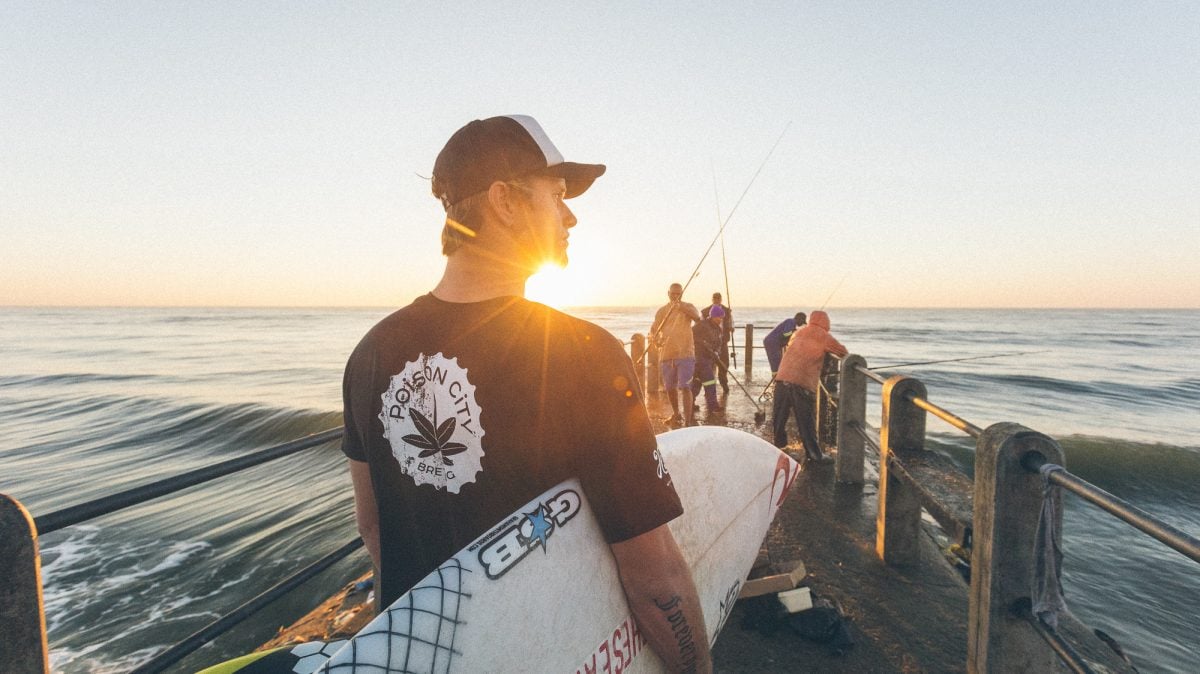 Growing up as a surfer in Cape Town, Durban was always such an anomaly, a glitch in the surf matrix. For us, surfing in the Cape in the 80’s consisted of driving for an hour or so, parking at an empty car park in the deep south or up the west, and then walking in for half an hour or more at times to surf a deserted beach or an empty, kelpy reef. Surf preparation included cumbersome booties and flipper guards, chunky sandwiches, a 5mm Reef wetsuit, a flask of coffee if we had prepared for it, a bottle of Old Brown if we were flush. 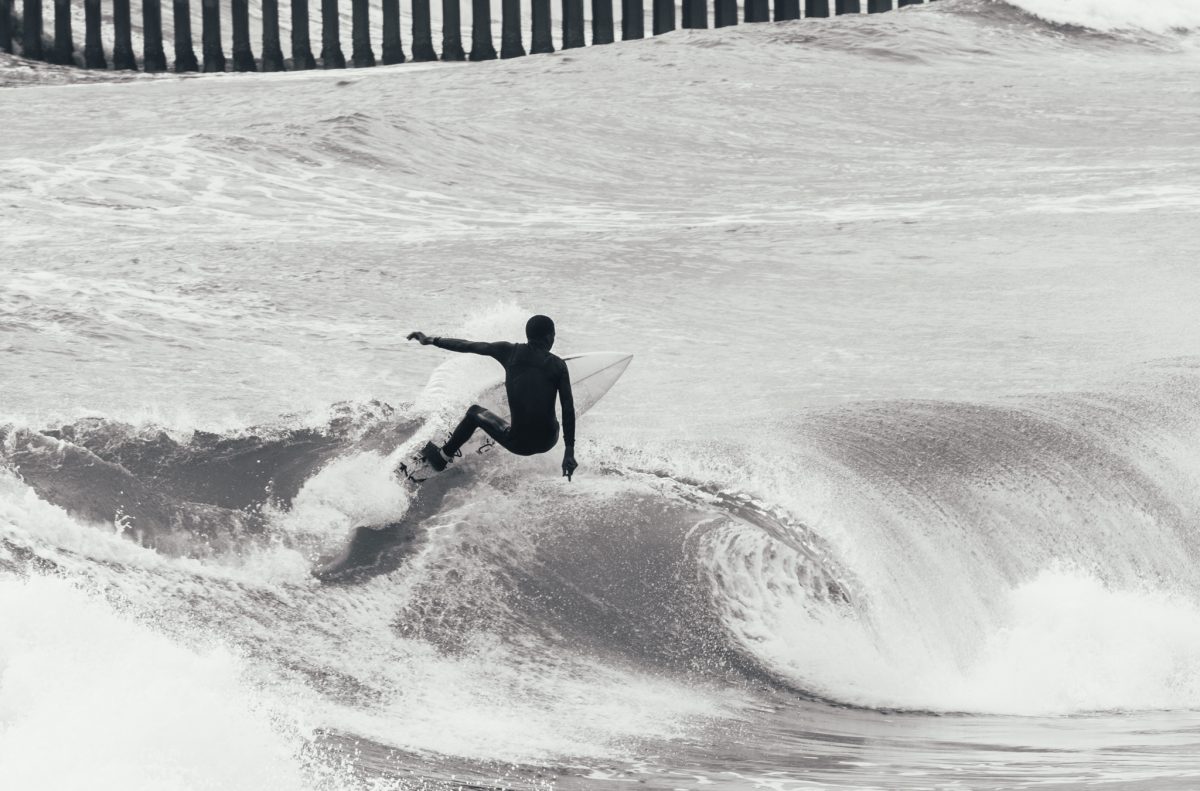 The imagery and vibe permeating from Durban was the antipode of ours. While we were black wetsuits, male bonding, pale skin and zinc, the Durban scene was about bright baggies, suntanned bodies, reflector shades and girls in bikinis. 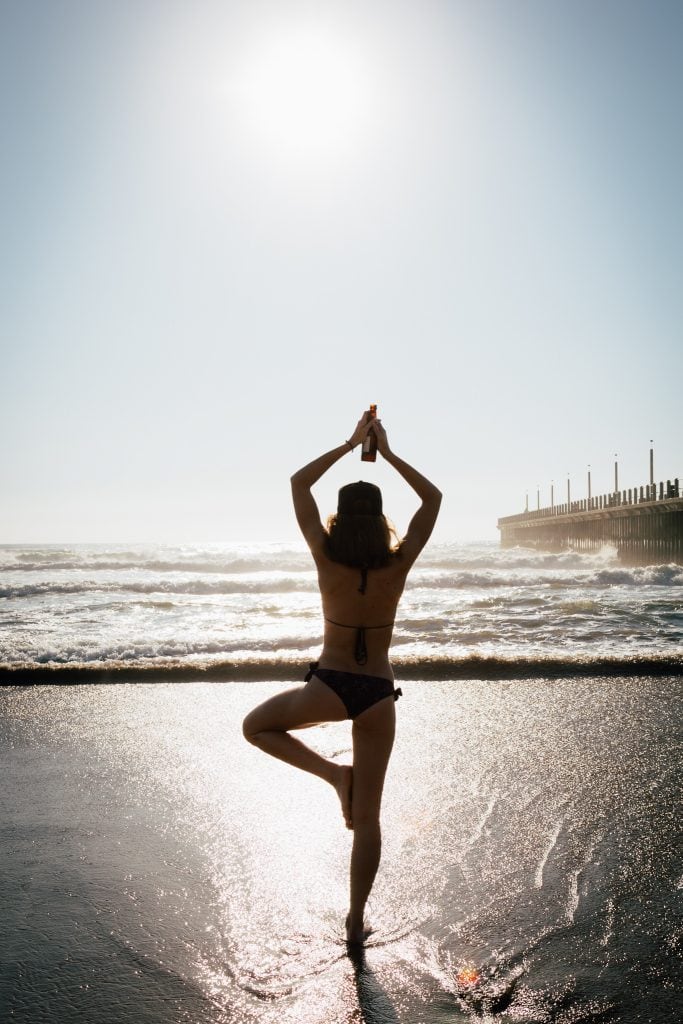 Emma, the Durban girl in a bikini – North Beach morning

The Durban surf scene seemed way easy, with warm water, consistent waves and miles of empty coastline. It also seemed gritty and urban. The only place we had that had any sort of grit to it was The Wedge in the harbour, where waves would bounce off the dolosse and create perfect left-hand wedge barrels. Durban on the other hand had the original solid groynes, and then it had the piers. They were big chunks of concrete and steel, sticking out into the ocean. There were people standing over surfers and looking down at them riding. There was nowhere in the Cape where this existed, and it was hard to fathom. We surfed in isolation, far out to sea, amongst kelp and sea creatures in freezing water. Durban surfers got gently tugged out in the rip alongside the piers with the sun beating down on their backs. 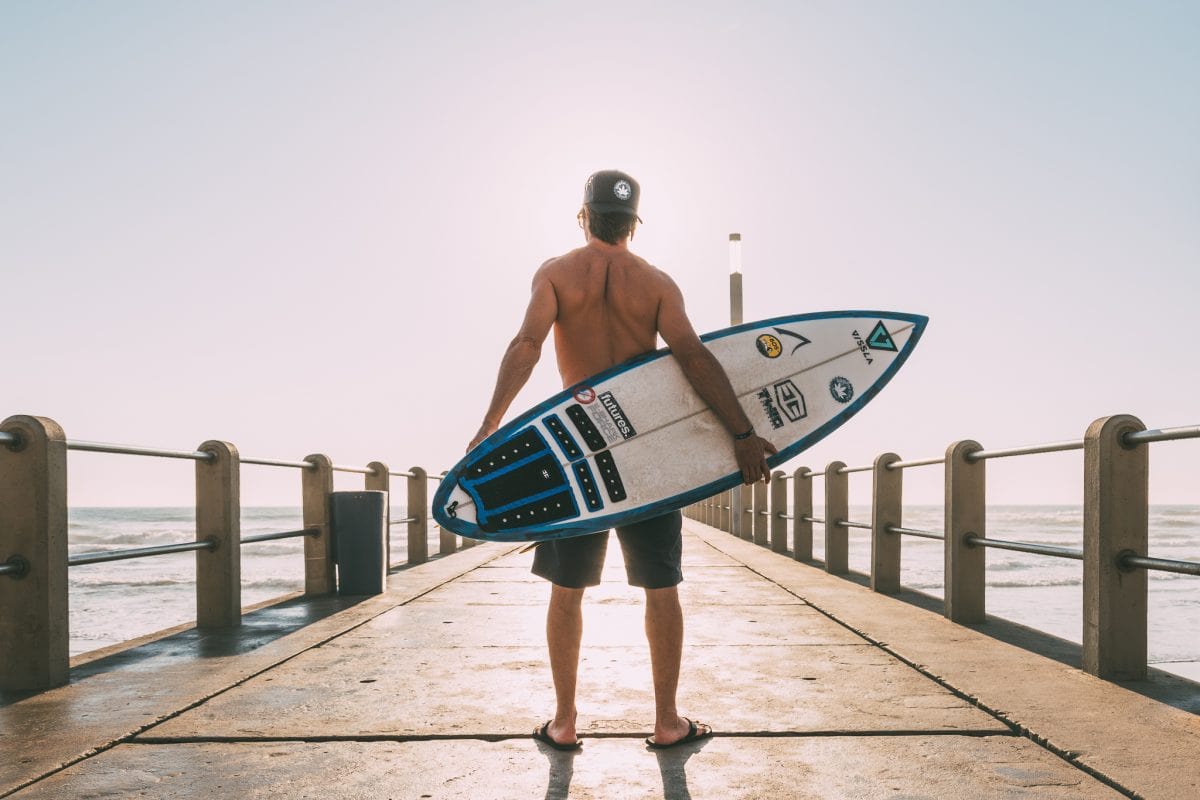 While much of our perception was kind of right, an ideology that permeated through from the pages of Zigzag magazine, and a few of the other start-up magazines that came and went here and there, one thing that we in the Cape got totally wrong with regards to the surfers in Durban was that we thought that they were small wave rippers and nothing else. When the tour came to town, SABC would cover the events and we would all wait patiently for the Gunston to air, and for the Renault Sport to be broadcast. When they finally did air, the waves were always abysmal. It was always tiny, onshore, and absolute muck, with surfing performances always about who could grovel the best and make the inside connection in micro surf. This led us to believe that Durban surfers, jumping off piers, using the rips and continuously surfing tiny waves, were naturally useless in big waves, and that Shaun Tomson learned his tricks in Hawaii.

This was totally incorrect. Durban surfers loved to charge. The warm water and pier access was conducive to valiant efforts whenever the surf got massive, and the Durban boys loved nothing better than to give it their best go when the surf was gigantic. Back then, the waves at the Bay were often solid, with more swell coming around the corner and more defined sand banks to accentuate the swells.

When The Bay was on, with stand up tubes lurching over the bank, it was a man’s game out there. No inexperienced lighties, no dropping in, no fucking around. 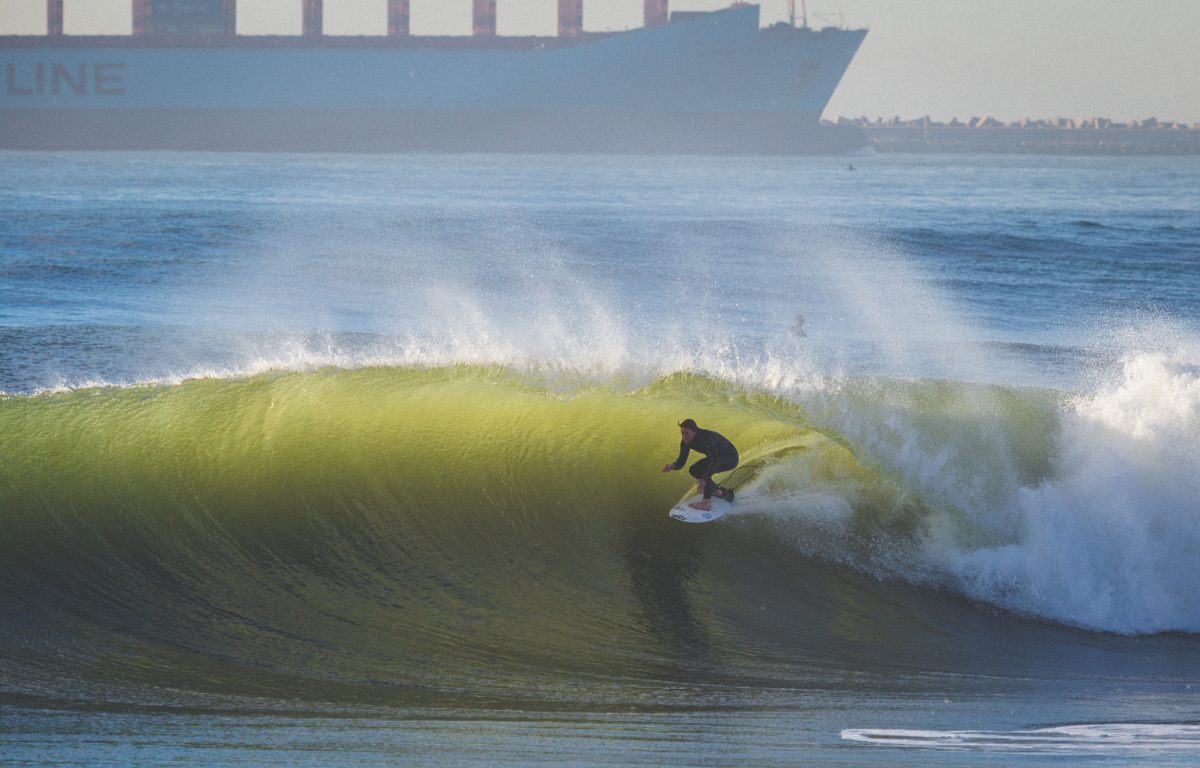 These days much has changed in Durban, but the principles remain the same. When it gets big, there are no shortages of surfers on finely tuned guns, ready to turn and go when the big ones start rolling through.

That’s how Durban fostered guys like Twiggy, permeating up through the ranks to be a Big Wave World Champion twice over. 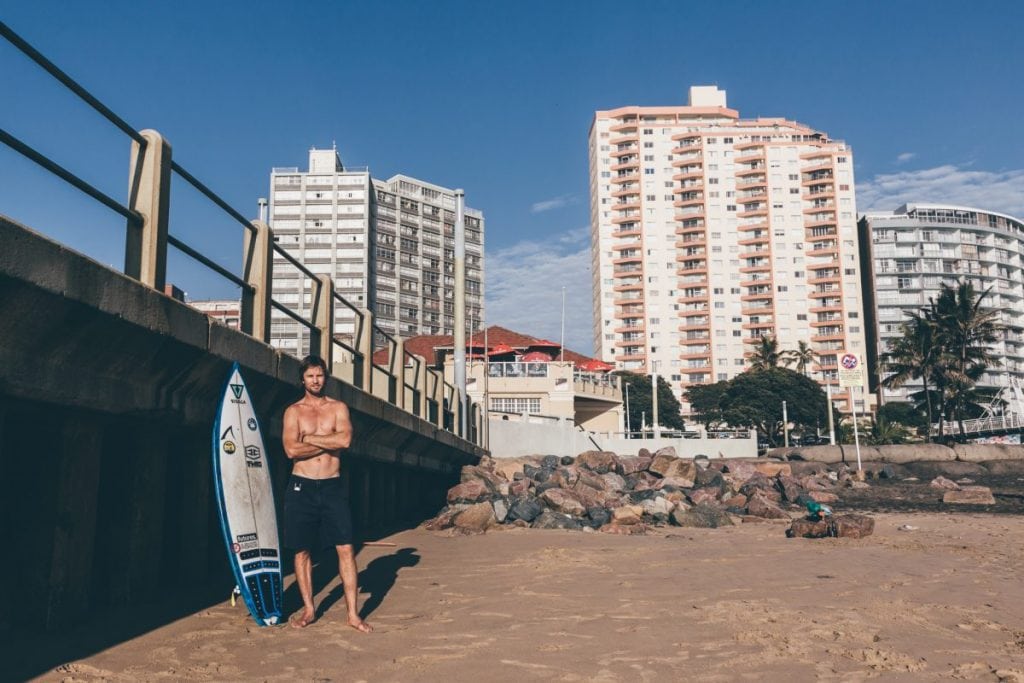